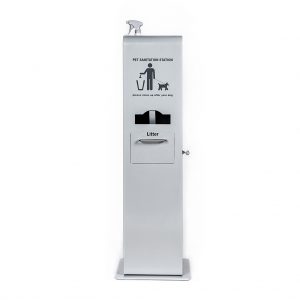 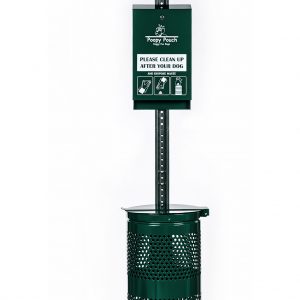 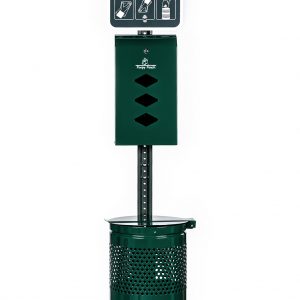 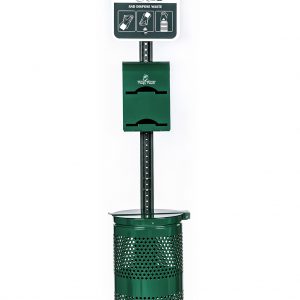 Few things are worse than going out to your local park, ready to play catch with your kids, only to be stuck dodging smelly landmines left by local doggos — or, more specifically, left by inconsiderate dog owners. In a perfect world, everyone would let their dogs out to do the doo in their own yards. But, especially for dog owners in apartments and townhomes, keeping it to a private yard may not be an option.

As members of your local community, no one wants to have public spaces spoiled by trash or pet waste. Not only is it unsightly and smelly, but that litter also makes public spaces unwelcoming for everyone. But past experience has shown that threatening fees for leaving litter around are only minimally successful. After all, how can offenders get charged if they are not witnessed in the act? In most areas, it is law that pet owners must pick up after their dogs. But despite that, so many individuals leave their dog’s messes to gunk up our public spaces.

Instead of trying to fine offenders and getting increasingly frustrated that no one in your community picks up after their pets, try a different tactic: set up pet waste stations around the area in easily accessible spots. When it is easy for pet owners to grab a dog waste bag, clean up after their pet, and toss it in a nearby dog waste receptacle, you may be amazed at how much cleaner everyone will keep your public green spaces.

So, What Is a Pet Waste Station?

If you spend much time around public parks and other green spaces, odds are good that you have seen a pet waste station before. These are durable stands that hold a refillable dog waste bag dispenser and trash bin. Most pet waste stations are made to endure the elements since they are built to live outside. They are also generally low-profile, making it easier to put pet waste stations where it makes the most sense, even if space is limited. By placing pet waste stations around any public space, this adds easy encouragement for everyone in the community to contribute to cleaner spaces. When it’s easy to grab a bag and dispose of a pet’s waste, more individuals are likely to do so. Ultimately, pet waste stations lead to a cleaner community! 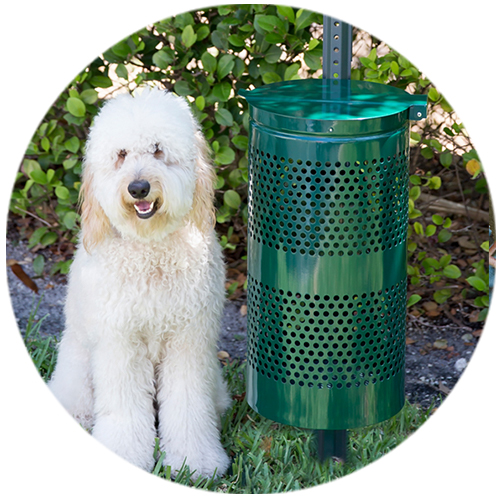 Get to know the Pet Waste Stations from Crown Products:

The biggest benefit to pet waste stations is one we have already mentioned: it encourages everyone to clean up after their pets and keeps public spaces cleaner. But let’s break this down a bit more, because the worry goes beyond dodging dog doo when you’re trying to enjoy your local green space. Here are some of the biggest benefits to installing pet waste stations around any communal areas:

They Minimize the Gross Factor

Let’s face it, no one really enjoys cleaning up after their dog’s messes. It’s pretty gross. Want to know what’s even worse, though? Leaving other people to deal with your dog’s piles of poo. Dog doo doesn’t exactly get any better as it sits around. It smells awful and attracts bugs. Worse still, dog poo that gets left around becomes a veritable landmine for anyone trying to enjoy the space. Do you want to picnic next to a smelly pile? No! Well, your neighbors don’t want to either. Placing pet waste stations at regular intervals around any public space encourages everyone to pitch in and pick up after their pets so you can actually enjoy the outdoors without worrying about little stink piles all around.

Pet waste is gross; we can pretty much all accept that. Worse still, it’s incredibly unhygienic. Dogs can carry viruses and bacteria that don’t impact their health but can cause serious health problems for humans — especially for kids, whose immune systems haven’t had a chance to build up yet. Leaving dog waste around, especially near parks and fields where kids play, can actually be a serious vector for the spread of disease. What is more, dog waste can be carriers for parasites like tapeworms that can cause some serious health issues. Pet waste stations give pet owners an easy place to dispose of poo, which traps those diseases somewhere that severely limits the spread and keeps the community healthier. 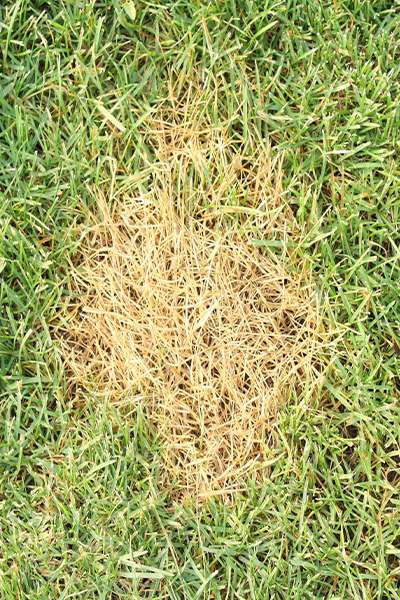 Did you know that dog doo can actually kill plant life? It’s true! Most of us tend to think that pet waste, just like manure, can make for great fertilizer. But when it comes to dog waste, it’s time to stop thinking that you’re doing the grass a favor by leaving pet waste around. Not only does dog waste carry a lot of bacteria and parasites, but it is also an environmental hazard. On a basic level, leaving pet waste around encourages flies and other insects to visit, which helps to spread any diseases that poop may be carrying. Then, if pet waste is left to slowly degrade into the soil, any contaminants in the poo will filter into the soil, eventually making their way into the plant life. Some contaminants can actually kill grass and other greenery, while others simply make the greenery unhealthy for any wild animals that might nibble on it. The more we can encourage everyone to pick up after their pets, the healthier it is for the greenery in our public spaces.

Not all pet waste will get broken down and absorbed into the soil. A major portion of it will get washed away by rain and sprinkler systems. Now here’s something to think about: what do you suppose happens to all the bacteria and parasites in pet waste when it washes away? Whether it washes into the storm drains or soaks down through the soil, the contaminants in pet waste generally enter our waterways. While the water gets processed before it comes to our taps, there are still plenty of ways in which stormwater is used that can lead to pollution issues. Not only is stormwater often a source of hydration for animals, but it is frequently used to water public green spaces — without being treated first. Stormwater often flows into streams, ponds, and other natural bodies of water, where those contaminants can spread. This is why it’s such a serious issue to make sure pet waste is cleaned up, and why pet waste stations are becoming increasingly important around public spaces.

Overall, the most important factor here is that pet waste needs to be picked up instead of left to contaminante our public spaces. Since it can have such wide-reaching impacts, and since dog waste can carry so many potentially contaminants, it can make a huge impact on the overall health and well-being of your community to encourage everyone to actually pick up after their pets. Pet waste stations can be the game-changer that turns those idealistic views into a community-wide reality.

So, who exactly needs pet waste stations? While this could be a fun and easy way to keep your home’s backyard neat and tidy, our pet waste stations aren’t necessarily made for residential use. They’re made for higher-traffic needs like parks, hiking paths, apartment green spaces, HOAs, and other similar public spaces. We even offer indoor pet waste sanitation stations for malls, airports, hospitals, and other indoor spaces that see a lot of four-legged visitors — especially areas that get a lot of service animals visiting.

When it comes to pet waste stations, we know that your needs may vary. For example, in more moisture-rich climates, a covered pet waste station or dog waste receptacle will make a huge difference in keeping everything neat and tidy. Do you need a multi-bag dispenser for a high-traffic area? What about an attention-grabbing sign to remind folks to actually use the station? Check out the options below to help you find the right pet waste station option or options to best fit your needs! 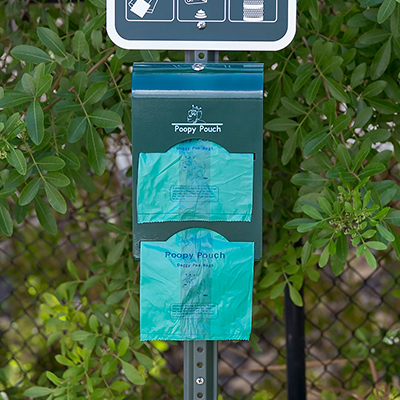 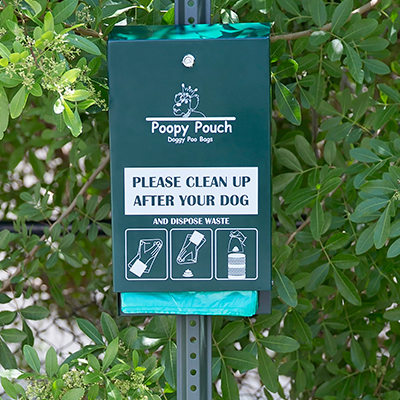 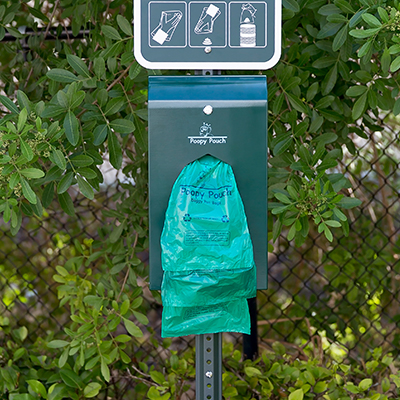 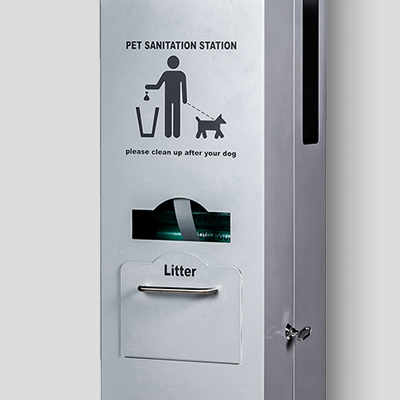 If you’re looking for a pet waste station that meets the “best of all worlds” options, the Imperial is it! This pet waste station starts with a sturdy 8 ft. channel post made from galvanized, powder-coated steel so that all of the attached elements can stand strong through high winds, rain, and other weather. This supports a galvanized, powder-coated steel waste receptacle bin and pet waste bag dispenser, as well as a “please clean up after your dog” sign with quick clean-up instructions. The Imperial, like all of our outdoor pet waste stations, is made to stand up to all kinds of weather. The double-roll dog waste bag dispenser can hold up to 800 bags at a time, and is great for low- and medium-traffic areas.

As we mentioned above, there is a wide variety of needs for indoor pet cleanup — especially with the rise in spaces that need to support service animals. Make it easy for owners to clean up after their dogs by providing an Indoor Pet Sanitation Station in any interior pet relief space. Our all-in-one station includes a dog waste bag dispenser as well as a paper towel holder and spray bottle holder so users can clean up any mess easily. The built-in waste receptacle can be accessed through a push-open flap to keep unsightly smells trapped inside instead of wafting around the space. All of this is neatly arranged in a sleek, silver, free-standing station so that it can be placed anywhere you need it, and not just attached to a wall.

Want to learn more about keeping your spaces sanitary and pet-waste free? Connect with the team at Crown Products to explore all of our sanitation products!