All Dogs Should Should Know These Five Commands 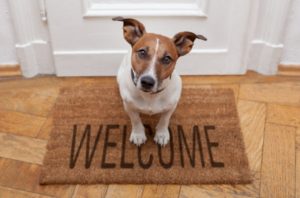 When training a dog, one should first understand why commands and obedience are important. Yes, it’s great to be able to tell a dog to speak or shake and see them do it. People are impressed. The dogs seem happy and the dog owners seem to get a great sense of satisfaction. But is there more to why a dog should learn to do “tricks” or respond to commands? Absolutely.

When a person gives a command, and the dog in turn responds as it should, it displays a level of obedience that is very necessary. A dog who will sit on command, roll over when told to, and speak upon request is an obedient dog who will also listen to the owner during moments of great distraction or excitement. These are the building blocks for creating the conditions in which a dog can live its life free of worry about chasing after cars, or worse, getting excited and biting someone.

Let’s walk through the five most important basic commands that all dogs should know. And better yet, let’s learn why and how each individual command benefits the dog and the owner’s lives. Let’s also learn to quit referring to these as “tricks”, for the terminology tends to dilute the importance of the dog’s obedience.

“Sit” is one of the most basic commands one can give their dog. Virtually every dog knows how to sit, and some practically do it on their own with no coaching. Some require more coaching on it, however in certain ways that’s a good thing. Teaching “sit” is a great thing to do, as it helps to teach both the dog owner and the dog the process by which they will be training.

Teaching a dog to sit not only teaches the dog to sit. It also does a great job to teach the dog to listen to the owner’s command. Having a dog sit can break them from wherever their brain is taking them and focus on the task at hand. Sit is simple to teach and a foundational principal on which one can build up.

“Look at Me” is a command which could potentially be the most important command for a dog to learn. Teaching a dog to break its concentration from whatever they’re doing or focusing on and replacing that focus with the trainer is incredibly necessary for proper obedience.

This is also the number one tool a dog owner has in their tool bag to help prevent their dog from getting into trouble. By breaking their attention from their distraction and making them focus on the trainer, the trainer reassumes dominance and control. The trainer should be in control, not the dog. Dogs don’t make great decisions when left to their own decision making.

Teaching a dog to “stay” upon command is crucial. Sometimes, the owner will need to leave the dog unattended while they do something and it’s important that they are able to get the dog to remain in their designated location while they do so. Teaching a dog to stay upon command will also help greatly to reduce the risk of a dog running when it sees something enticing. Instead of seeing a car and running after it, the dog will be focused on its current task, which is to “stay.” Those who skip teaching their dog this important command are doing themselves a great disservice.

Some may argue that teaching a dog the concept of the word “no” is not a command. However, the notion that it’s unimportant for a dog owner to teach their dog the universal word for “don’t do that” is ludicrous. Having a one syllable phrase which is able to convey so much direction and meaning is a great tool to be able to use, and those who don’t take the time to ensure their dog understands that “no” means to stop whatever action they are doing which they shouldn’t be have a long road ahead of them filled with miscommunications and getting frustrated at their dog’s poor behavior.

Teaching a dog to “let go” of whatever it is they have is a great component of obedience. Not doing so can allow the dog to believe that whatever item they have is indeed theirs. They need to know that their toy isn’t there’s. It’s the owner’s who is allowing them to use it, but the owner should have the ability to regain the toy whenever they choose. This teaches the dog that they are not in control and shows them who the dominant figure is in the dynamic.

Dogs require commands. They need taught certain things. Teaching “sit”, “look at me”, “stay”, “no” and “let go” will make both the dog’s life as well as it’s owner’s better. This will also do a great service to the world as a disobedient, untrained dog can be a dangerous animal. They need rules. They need commands. Be the alpha.